So Mad Max: Fury Road came out in the summer of 2015 and a friend was really into the whole mythos and genre. He picked up an old Milton Bradley game, Thunder Road, first published in 1986, and showed it to me.

After playing the game, I immediately got hooked and had to get a copy.  I ended up with a UK version off eBay for not too much considering the movie was pushing the secondary market value through the roof.  My friend had commented about pimping out his copy with additional rules and paint jobs and I couldn’t resist the temptation either. I checked out Boardgamegeek and it pushed me to want to both pimp out my set as well as push the game system farther.

I set out with customizing my teams first:

I tore most of the vehicles apart for painting and incorporated Boardgamegeek user Roolz’s clear plastic rotor for the gyrocopters. I wasn’t a fan of the abstract “gunners” on some of the vehicles so I pillaged some Resistance Fighters minis (10mm) from Dropzone Commander. The War Rig is such a cool concept that I picked up a Thunder Road micro machine and used a file and drill to distress the model and paint it up. I added toothpick spikes to some of the vulnerable areas and grabbed another Dropzone Commander piece to work as the plow/fender.

I really liked BGG user Mathiasrapp’s campaign map idea so I made cards used to determine what board type would come up next. I pillaged the concept straight from his WIP post.

This created a couple of needs right away with new boards and terrain. Using BGG user Soldier’s great large map (without grid), I was able to photoshop two new boards that were similar in concept to BGG user David Miller’s Bridge board. 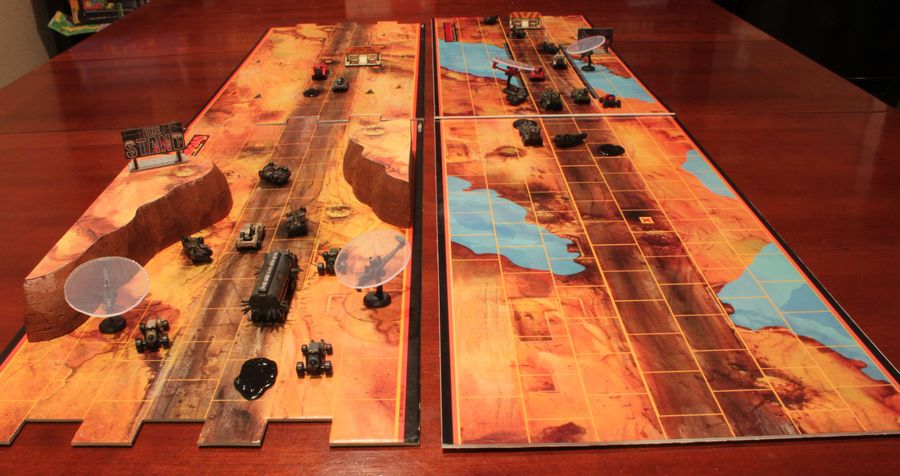 These boards were made just using a Walmart photo lab to print a large image with both board images on it, cutting them down, and spraying adhesive on them onto art board. Finally, I cut the art boards down to size and they were ready to rock. I was able to do water effects pretty easily but I wasn’t able to create any cliff edges that matched the art style to my satisfaction. I decided to save on creating cliff-side boards by making miniature cliff terrain out of corkboard. I glued layers together and sanded down the shapes I wanted. Lastly, I painted them up to match the color scheme of the boards and glued art from the board on top of the “mesa” to help it blend in. 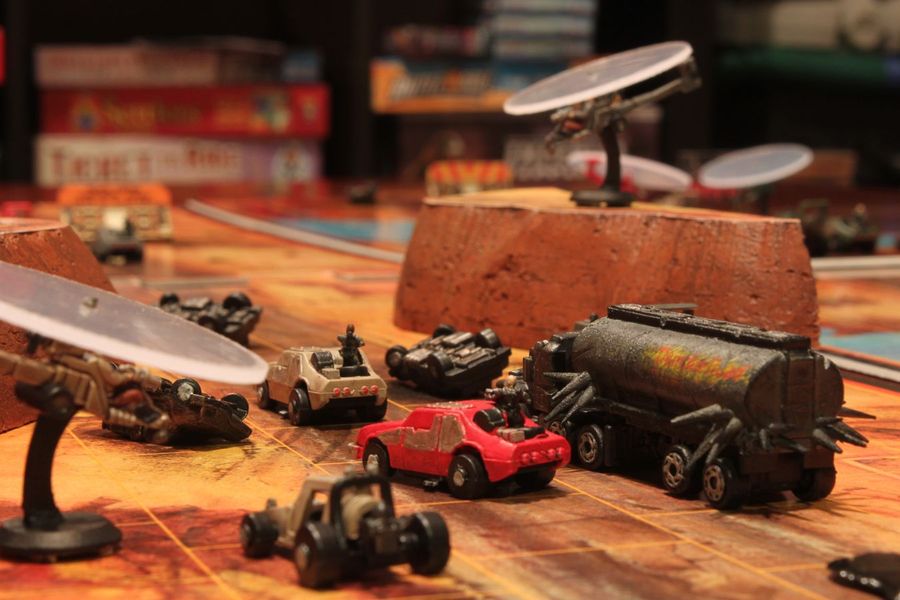 You might also notice some signs and some oilslick markers in that double board image. The signs and road blocks are 10mm terrain from 4Ground‘s 10mm Sci-Fi range. The Oilslick markers were super easy: squeeze out a blob of black acrylic paint on a plastic painting surface and wait for it to completely dry. Then seal it with a high gloss sealer and they are good to go.

BGG user Soldier had a cool concept going with his advanced rules where you could customize your vehicles before the game. I loved this concept and Soldier was gracious enough to send me the source files from his WIP thread.

I was wanting to keep the rules as simple as possible and keep the standard rectangle grid layout so I modded a few of Soldier’s vehicle concepts to still work within the existing game (closer to David O Miller’s Advanced rules).

This has been, by far, one of my favorite games to pimp and if you like anything you see here I encourage you to click on the links of the other user’s customs and thumb them as my variant would not have been possible without their contributions. 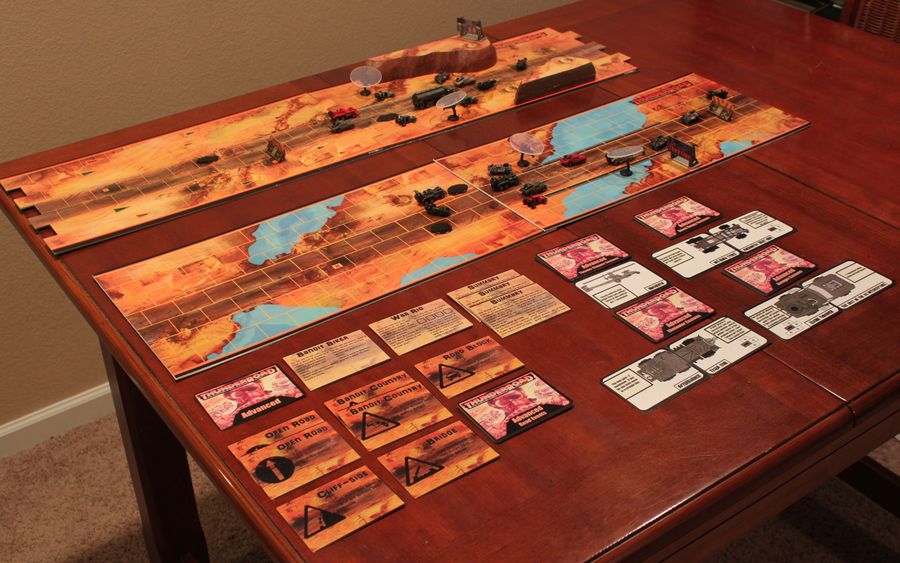