I’m a huge fan of dexterity based games so it likely comes as no surprise that I’m really into the disc racing game, Pitchcar.  This game features finished MDF boards cut to slot car racetrack pieces that you freely assemble into a race course and flick your “race car” disc around, simulating an F1-style race. 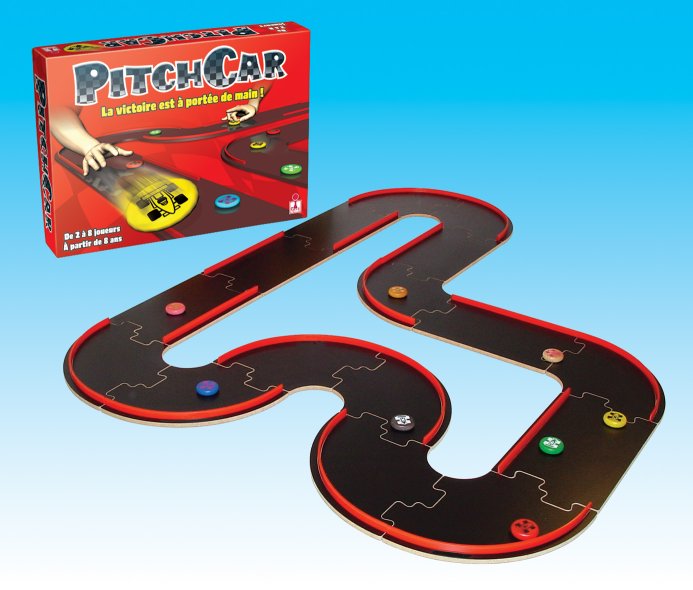 At this point, I had both versions and it seemed a shame to only ever use half the pieces I had so I wanted to make some sort of transition piece to be able to race on both sizes.  I had a few options on how I would approach it but my decision was made for me when Boardgamegeek user flashhawk posted a Pitchcar-to-Pitchcar-mini conversion template.

With some old laminated pressboard in the garage, I printed out the template and got to work.

First thing was I attached the printed sheet to the board with a glue stick and then Dremelled the pattern out.  This was the first time I’d used the Dremel for this kind of work and it was pretty sloppy.  By the end of the piece, I was able to get a handle on it. It will be rough but still serve its purpose.

The Dremel leaves a lot of rough edging so over to the belt sander I go.  This also helped smooth out some of the lines and contours. After things were more or less clean, I went down to test fit.  Of course it was way off but overlapping the correct jigsaw piece and marking the adjustments with a pencil is easy enough.  Back to the sander for some adjustments and back down for another fitting.  I think I had to do this about two more times before everything was where I needed it to be.  Next time I’ll keep the pieces by the sander to limit the back-and-forth trips.

As you can see, it’s not pretty, especially the smaller connection on the right, but it’ll do for a first pass.  The piece still isn’t complete as the thickness of the pressboard is a quarter inch and the Pitchcar tracks are less than that creating a horrible “lip” that will ruin the play experience.  Back to the belt sander again to round out those lips and get rid of the glued paper still stuck to the piece (the white bits you see in the picture).

This completes the piece from the gameplay perspective.  I’ll still need to paint it black and seal it but I’ll wait until I finish up the other side.  I also have some ideas on some other custom options so hopefully more to come!